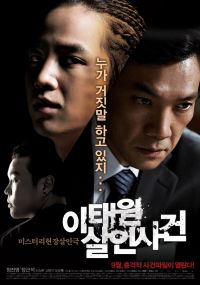 I’m on a Jang Keun Suk’s (JKS) movies/dramas marathon ♥♥♥…In my quest to get up close and personal with him, I’m dedicating a week of watching most of his work. In this movie, as always, he showed his versatility as an artist! The movie is actually based on a real events. It’s actually a case gone cold. It remained to date an unsolved murder case.

JKS plays Robert Pearson, an American Citizen (half Mexican/half Korean) studying in Korea. A college student, Jong-pil Jo, with his girlfriend went to dine at a (Burger King in real events) burger chain in Itaewon, Seoul. The boy is later found stabbed to death in the restroom of the restaurant. Two Korean-Americans, (JKS) Pearson and Alex, are known to have gone into the bathroom after Jong-pil Jo and become prime suspects. The prosecution must now determine which of the two committed the crime.


Again, this is yet another noteworthy performance of JKS. He plays his role as a psychopath brilliantly. A bonus here is that he speaks English most of the time. ♥♥♥ him much here! He did it effortlessly! His character would really stand out from his other works because most of the time, it’s like out of character, which basically tells one how talented he is as an artist. His signature killer smile will be seen only in the last part. He displays tattoo and wears cornrows. He played his role as a thug with a style. So this is me raving on how talented my dongsaeng JKS!

Going back on the storyline, most of the time it covers on flashbacks both from Paerson’s and Alex’s version of the event. Until the last part, I’m still unsure of who really did it. Their friends also didn’t help because they gave different versions on who went it first and who claimed did it. If I got my translation right, it was never really found out who said “I’ll show you something cool!”. The defense tried to pin it on Pearson (JKS), while the persecution tried to blame it on Alex. Again, no spoilers intended because this was actually based on real events, Robert Pearson here is actually an Arthur Patterson  and Alex character is based on Edward Lee. In relieving the actual murders,depending on whose version, would be overall bloody and brutal and not for the faint hearted. If not for JKS acting in it, this is not so for me! To the well-informed on the actual events, the movie has been said to made a good and unbiased, even informative way of retelling the sad condemnable case. Just as said, regardless of who did it, it was really a sick act from teenagers who made a mockery of the life of an innocent hardworking student and son.

I was of course in denial, still thinking that Alex was the one who did it! There were three instances, which for a second convinced me that he did it. First was when he took the lie detector test, he was shaking miserably. The second was when he mentioned to his dad, not intentionally though, “that he should have showed them!” …again this is me hoping I got the right translation. “Them” meaning his friends. His dad even wanted to ask more about it but just let it go. The last one was when he was finally acquitted and visited the defense lawyer, and his lawyer overheard him saying to his girlfriend that he will tell him something cool. The defense lawyer actually felt uneasy.

On Pearson, he was really hard to read. The lawyer was actually having hard time reconciling with his decision to pin it on Alex. Pearson showed intense emotions during the visit to the Crime Scene. During the reenactment, he acted with haunting familiarity on the brutal stabbing. He just then pushed the victim on the wrong side, which made the prosecutor lawyer unsure of his innocence. At the last part, where Pearson was saying his farewell to the lawyer, he started speaking Korean, which puzzled the lawyer even more.And then you can see the psychopath Pearson walking away smiling. In the end, it’s just a series of unfortunate circumstances, which left no one really accountable for the brutal killing.

In one of the actual report of the event, they titled it as No Crimes by U.S. Troops! Because, the 1997 case remained unsolved! Pearson (Patterson in actual events) unfortunately was able to leave Korea and was never again heard of or seen again to date to warrant the continuation of legal proceedings.Justice was never served! I guess, this movie in effect gives a glimmer of hope to Jong-pil Jo and to his family and to other victims of senseless brutal crimes, worse even motivated only by fun! He was never forgotten! Reality Bites! This hopefully is a wake up call to the justice system that sometimes through a lot of technicalities, justice, which seems so near is yet so far!

So many dramas, so little time...fangirling is bliss!

A daily selection of the best content published on WordPress, collected for you by humans who love to read.

So many dramas, so little time...fangirling is bliss!

The best longform stories on the web

The latest news on WordPress.com and the WordPress community.